Christine Tobin is an Irish born vocalist and composer. She grew up in Dublin and moved to London at the end of the 1980’s to attend the Guildhall School of Music & Drama, for which she was awarded a full scholarship. She was an integral part of the London contemporary scene for many years, but is currently based between the countryside of Northwest Roscommon and New York City.

In New York City she created, co-curates and performs in the highly successful series “Tobin’s Run On 51” at the Irish Arts Center with guitarist partner Phil Robson. These are themed, mixed media shows which feature slideshows, film clips, story-telling and invited guests who comprise of some of the greatest musicians on the NY scene today including Ingrid Jensen, Steve Wilson, James Genus, Billy Drummond, Janis Siegel to name just a few as well as renowned authors such as Ashley Kahn.

Her authentic sound was described by The Guardian as “Tobin’s 24 carat voice” while praising her both for the poetry of her compositions and the warmth of her golden voice. Her style, although rooted in jazz, is eclectic and draws on a broad range of influences. MOJO Music Magazine said of her “Christine Tobin really transcends glib genre-fication. Her expressive range acknowledges finely acquired folk, jazz and 20th-century classical influences, which already sets her apart. And everything is shot through with an unmistakable refinement, free-spirited earthiness and giddy romanticism, this singer-songwriter is in a field of one.”

She has led various projects and in 2012 “Sailing to Byzantium”, her settings of WB Yeats poems, won a British Composer Award. The following year she won a “Herald Angel Award” at the Edinburgh Festival for her show “A Thousand Kisses Deep”, her imaginative versions of Leonard Cohen classics. In 2014 she won “Jazz Vocalist of the Year” at the Parliamentary Jazz Awards. Earlier in her career Christine won “Best Vocalist” at the 2008 BBC Jazz Awards.

Tobin appears in the most important venues in NYC such as Birdland, The Jazz Standard, Mezzrow, National Sawdust etc as well as in concert halls, clubs and international festivals around the world. 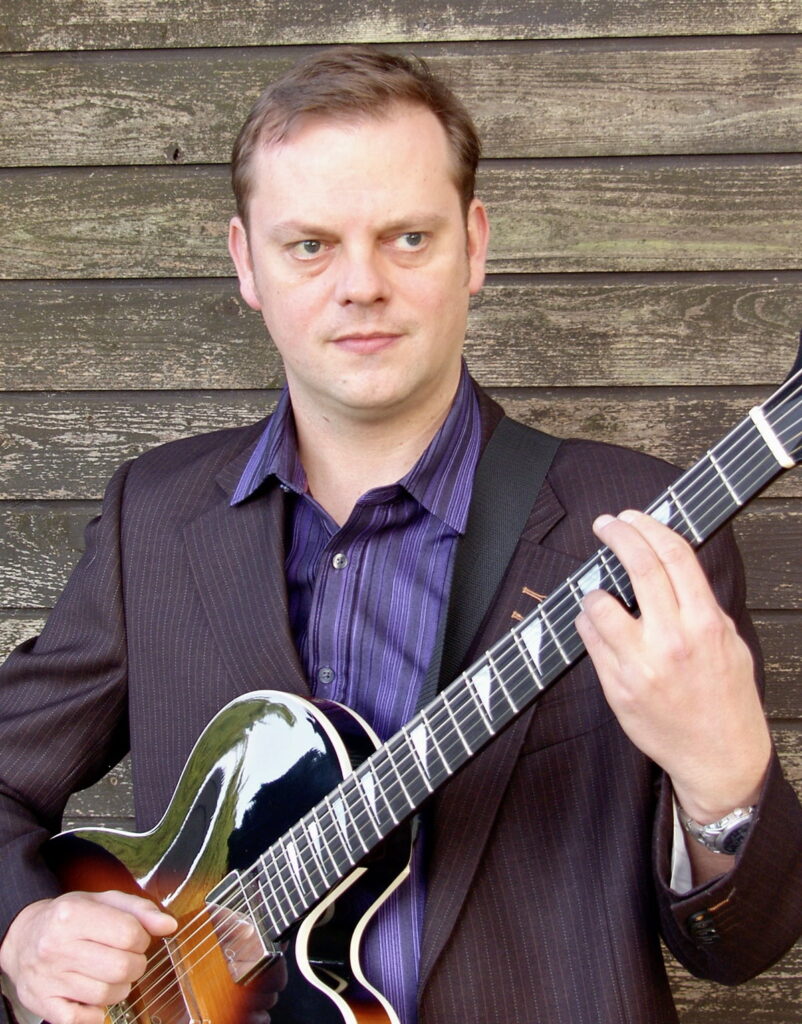 Phil Robson is a multi award winning guitarist & composer, originally from the UK who relocated to the NYC area in 2015. He has led bands featuring jazz legends David Liebman, Mark Turner, Billy Hart, James Genus, Dayna Stephens & many more as well as working as a sideman with Barbra Streisand, Maceo Parker, Charles Earland, Donny McCaslin, Kenny Wheeler, The BBC big Band & a huge spectrum of internationally renowned musicians. Best known as the co-leader of the cult UK band ‘Partisans’ along with saxophonist Julian Siegel & for his work with the great singer/song- writer Christine Tobin.

He’s also a ‘Whirlwind Recordings’ artist with highly acclaimed albums who performs at major venues and festivals around the world.

“Robson performs impeccably throughout, whether he’s contributing chordal washes in support, or taking the spotlight for some intricate, fluid solos of his own.” AllAboutJazz