Nigel Mooney has long been regarded as Ireland’s leading blues singer/guitarist. His sensitive tenor voice, soulful jazz guitar stylings and preference for an acoustic-sounding, jazz approach to the blues have made him a unique and popular artist. Mooney’s Gripewater Blues Band was a significant group on the Irish blues scene of the eighties, but the Mooney of today was first documented on debut first album ‘All My Love’s In Vain’ (Rubyworks). It became the island’s biggest selling jazz album of 2005, with major airplay from champions such as RTE’s Ryan Tubridy, and chart placements for the single ‘Beautiful Day’. 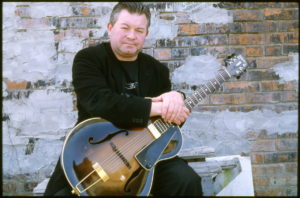