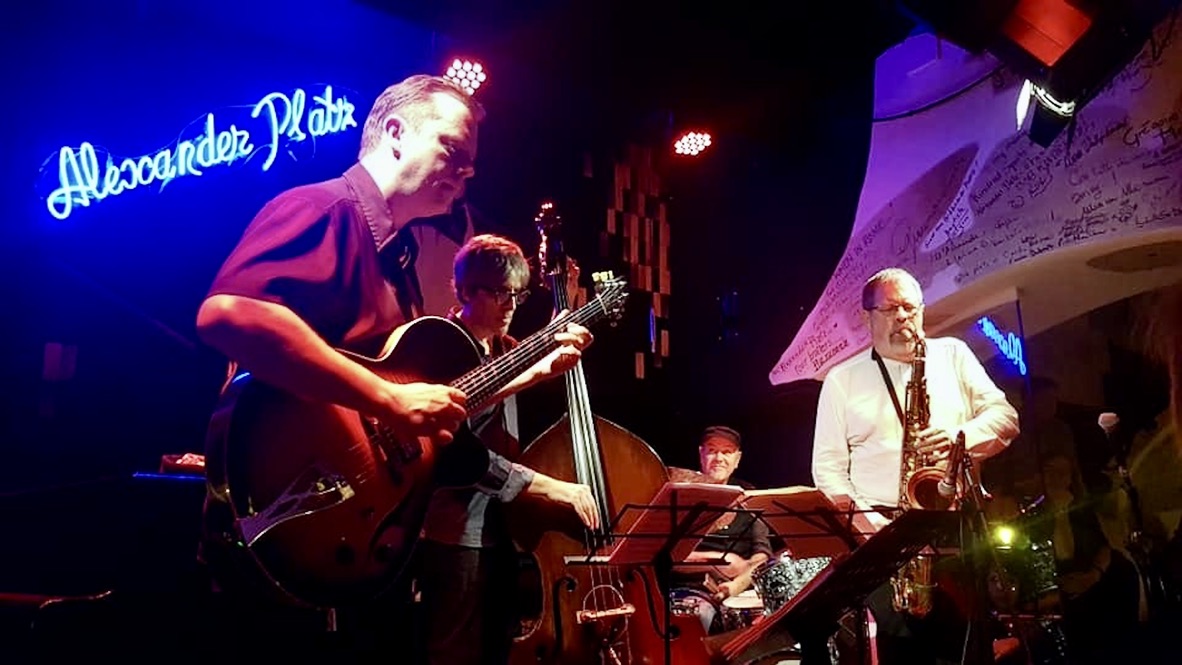 The Robson/Levy Quartet was formed in New York City in 2018 to perform the original compositions of the co-leaders in equal measure. Whilst Jed Levy is a celebrated mainstay of the NY scene, UK born Phil Robson lived in the city for 5 five years from 2015, having previously been a major force in London for many years and has now made his home in Co. Roscommon. Having met and begun to play together in 2017 they quickly formed a great musical friendship. Both bring a wealth of experience and diversity to the bandstand, both as composers and musicians.

Robson is best known in Europe for his work with the cult UK band ‘Partisans’ which he co-led with saxophonist Julian Siegel over 22 years, as well as with his partner, the great singer/songwriter Christine Tobin. He has led many projects featuring such legendary artists as Dave Libmman, Mark Turner, Billy Hart, James Genus etc and he has played with a huge array of internationally acclaimed musicians ranging from Kenny Wheeler, Donny McCaslin, Django Bates to Barbra Streisand. Levy’s composistions have been performed and recorded by such lumanaries as Mike Clark, Charlie Hunter, The Headhunters, Eddie Henderson etc. and Jed has also performed and/or recorded with a wide variety of jazz music’s finest, including: Jaki Byard, Don Patterson, Jack McDuff, Lonnie Smith, Attila Zollar, The Village Vanguard Orchestra, Junior Mance, Cedar Walton, Tom Harrell, Curtis Fuller and many others.

Having initially played in major NYC venues such as Smalls, the 55 Bar etc, with sold out performances at Birdland, they went on to tour the UK and play gigs in Barcelona, Berlin, Rome and completed a tour of Northern California in 2019 which included a highly successful show in the legendary Oakland club, Yoshi’s at which Peter Slavov and Billy Drummond completed the line-up. The band they bring to Limerick however, is more European based and will feature the incredible drumming of Rome based drummer Roberto Gatto and the fantastic US born, Ireland based Bass player Dan Bodwell. Roberto is a highly renowned musician who has worked with a ‘who’s who’ of US and European musicians including Chet Baker, Freddy Hubbard, Bob Berg, Steve Lacy, Johnny Griffin, George Coleman, James Moody, Steve Grossman, Lee Konitz, Michael Brecker to name just a few. Dan will be well known to Irish music fans for his work with Mary Coughlan, the Nigel Mooney Quartet, the Francesco Turrisi Trio, Julie Feeney, the RTÉ Concert Orchestra, the RTÉ Symphony Orchestra, the Quiet Music Ensemble and the Crash Ensemble.

The music written by Phil & Jed is innovative and contemporary, whilst drawing on the vast tradition of jazz, across a whole spectrum of styles. The emphasis is on strong melodies and grooves and the tunes are vehicles for improvisation, allowing each musician to bring their voice and to make them their own, a genuine musical melting pot!

This was high-powered jazz, not by dint of frenetic pace, volume or assertiveness but by the beauty and coherence of the quartet sound that was at once polished but fresh and lively. That’s a difficult poise to strike, even for musicians as able as these, yet for all that they were fully engaged, each seemed entirely in his element.

Added to the warmth of his sound and excellent command of the instrument, Levy is an impressive package deserving wider international recognition. Phil Robson is already gaining wider international recognition, as witnessed by the admiring comments on his playing from Peter Bernstein and Wayne Krantz to be found on his website. His great fluidity and fleet inventiveness were, as ever, balm for the ears.