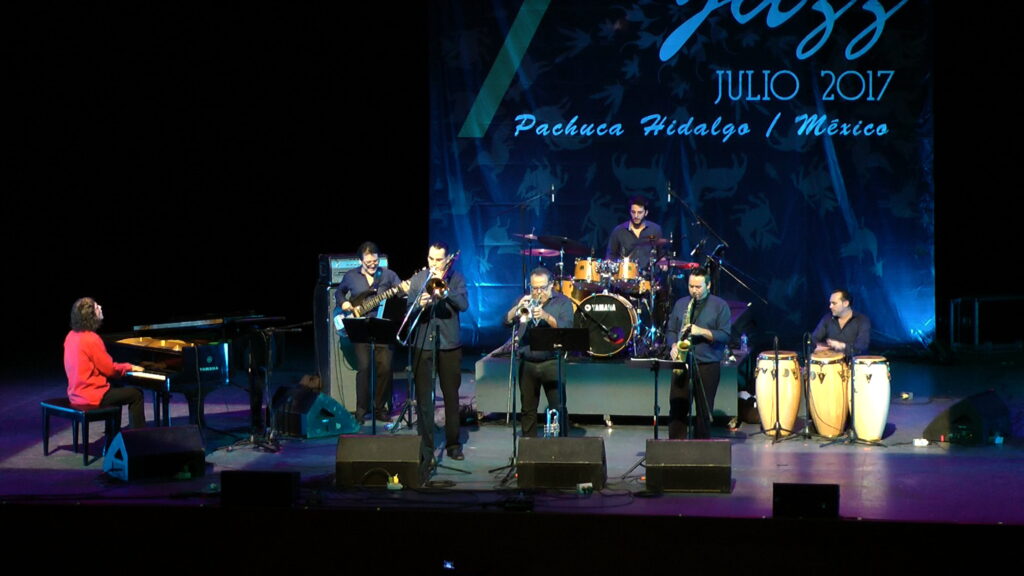 SEPTETO INTERNACIONAL is a unique combo of seven musicians from Cuba, Brazil, Spain and Switzerland. The repertoire consists entirely of Michael Fleiner’s own compositions in afro Caribbean and Latin jazz styles. It is music for the ears and the legs, for music lovers and dancers alike, performed by three virtuoso wind instrumentalists and a groovy rhythm section.
Michael is always searching in his compositions for interesting ideas from different styles to develop Latin jazz and afro Caribbean music and to give it a personal touch. You can find jazz harmony as well as contemporary rhythm concepts, traditional and modern Latin music, or even ideas from mathematics and physics which gave Michael the nickname “El Matemático del Latin Jazz” (the mathematician from latin jazz) in Latin America.
These very different elements are always packed in a hot and spicy Latin groove.

The actual CD is titled “Como me gusta el 7” (I do really like the number seven) is a reference to the odd time signatures (7/4 and 5/4) and the unconventional art of Michael’s music writing, the 7 musicians of the band (the perfect balance between 3 horn players and 4 musicians in the rhythm section to interpret his compositions and arrangements) Michael’s birthday 7 Feb. 1970 and the general specialty of the number seven: the seven notes of the scale, the seven days of the week, the seven wonders of the world; seven is a prime number; seven is a lucky number!…
Michael does really like the number seven!

So don’t miss the occasion to hear and see this extraordinarily exciting band with excellent musicians coming from different countries.